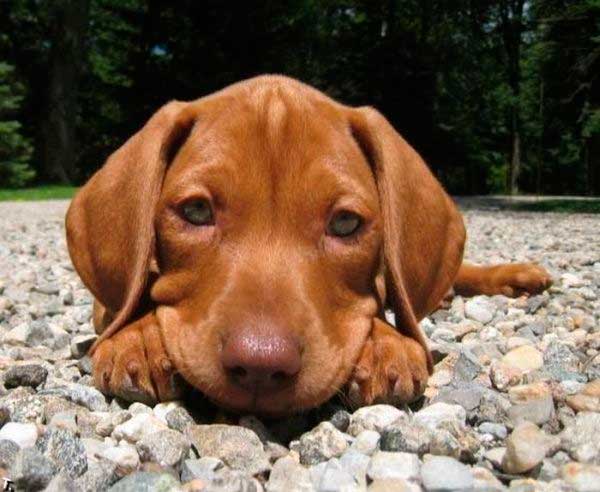 For the past year or so I have seen a little brown dog in my lane, the first time she appeared, she was approximately 4 to 5 months old and not only very thin but very much a puppy. Over time I saw her crossing the lane from a sheep pasture to a boy’s boarding school. She was staying in our neighborhood somewhere, but not being taken care of.

As she grew older, I decided to try to feed her occasionally to make her a bit friendlier and easier to catch. I wanted to get her spayed (an operation so she could not get pregnant and have a litter of puppies) before she came into heat the first time. She was by now in pretty good condition, and I thought she was being looked after by the school. I contemplated spaying her and giving her annual vaccinations and releasing her back to them.

If I saw Brown Eyes and shook a container of dog food for her she would come to me. At first I sat down and gave her a calming signal (turning my back and making no eye contact in dog language says I don’t intend any harm and that I am friendly). She would eat with me sitting there, which was a good sign, as she could have retreated into the hedge until I left.

Then one day after she had eaten her fill, she came around in front of me and sat. She looked at me very intently making direct eye contact. She seemed very curious about me. She then lay down in front of me and wagged her tail the tiniest bit when I chatted with her.

She was very thin and covered in hundreds of engorged ticks, and had a nasty sore on her ear as well as some other skin problem. I decided that day I would catch her spay her and then find her a nice home. By now she would listen for my car and come running. She would eat from my hand and even let me touch her under the chin, but if I moved to stand or put my hand up at all she was gone.

I had been trying to get a trap across town from KPSCA, but they only had one truck running (The KSPCA does a miraculous job with nothing, they are always understaffed, overworked and underfunded as they survive only on donations). The trap is very heavy and the drop door is tall, so it takes a very large vehicle and several big men to move it.

By now it was October and she was missing for several weeks and I suspected she was in heat. She then reappeared sporadically and ate, but was covered in ticks and fleas again and her coat was very thin. She was not turning up regularly, and her pattern of appearing was unpredictable. She went missing entirely for a while and although I even went out and hunted for her, no sign of her.

I went away for nearly two weeks in December and when I returned, it was clear she had had puppies. I could not find them although I looked and looked. She had little milk, so I guessed that the puppies were being weaned or they had not survived. I went out several times per day to try and feed her and to leave food near the thicket where I think she had the puppies or was holed up during that time.

In April, I started to watch the calendar because I could predict that she would likely come into heat again so this time I really, really had to get her caught before she had another litter of puppies. I had been talking to KSPCA during this time to schedule getting a trap across town and I was waiting for them to finish trapping 20 dogs that were causing a problem somewhere. However, she came into heat right on schedule and was staying further away from her regular areas.

I made a little Hansel & Gretel trail with dogfood where she would find it and where I wanted the trap to be placed. I made arrangements to get the trap before the end of the week. I also visited my neighbors at PaaYaPaa Art Gallery to see if I could place the trap in their plot to keep the trap secure (they often get stolen for scrap metal, even as big as they are). They agreed and KSPCA delivered the trap and my gardener and the askari from PaaYaPaa helped to set it up and learn how to rebait it if necessary.

I arrived home at 2:00 PM to learn that KSPCA had just been here with the trap and placed it minutes before. I left to go to the bank and saw the askari standing in the lane at PaaYaPaa, I opened the window and he said “it came.” I said “yes, KSPCA rang to say they had been and set up the trap.” He said “no, the dog came.’’ She walked into the trap less than 20 minutes after it was set!

Tune in for Part 2 next week.