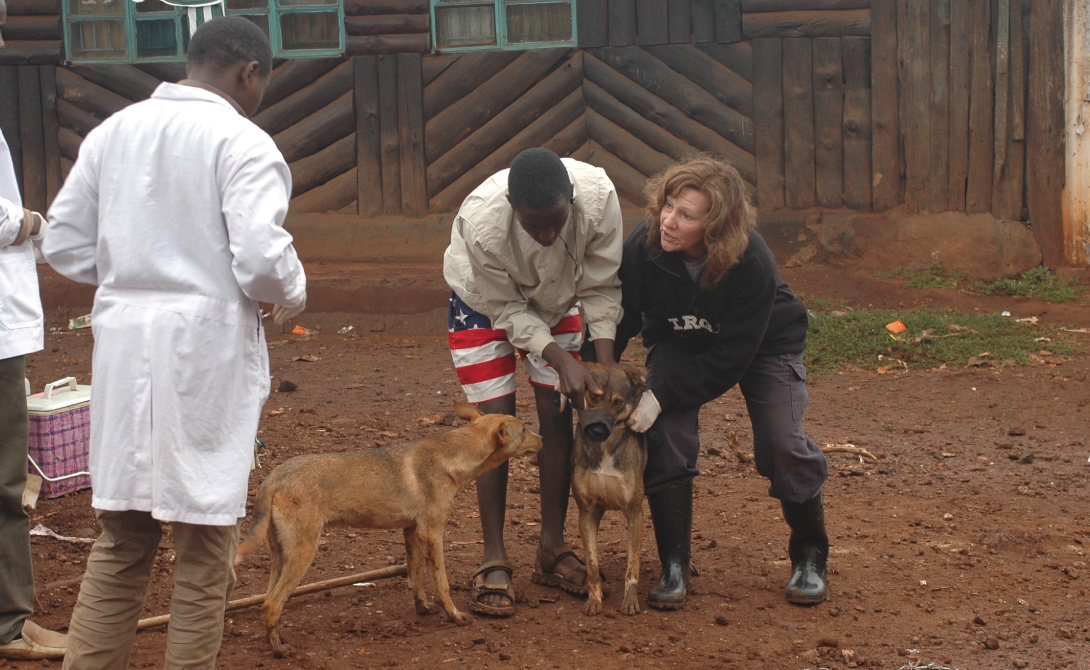 On the holiday Friday the 9th, I had the privilege to volunteer alongside the Africa Network for Animal Welfare people in Kangemi. We were supposed to be at the Village Inn of the Gachagi district, but due to the digging of trenches, one for sewer and one for fiber we couldn’t actually get there, so we set up in a bare spot in front of some shops. The ANAW landcruiser with speakers went around during lulls to tell everyone the clinic was going on and where to being their pets. The District Chief was present, she helped fill out forms, chatted to the residents and even helped hold a rowdy kitten while it was being vaccinated.

I started out filling in the forms for each person bringing their pet, but many of the children were too shy to speak to me. They moved their lips but no actual sound came out. I also had a bit of trouble with the spelling of some of the names, then there was a difficult dog I helped muzzle and restrain and that became my designated job. The dogs were led up on chains, electrical cords, speaker wire, twine or by the front leg. A few really big dogs were carried. The cats came mostly in gunny sacks. A resident would approach with a twirling, writhing bag at arms length. The owners face would be contorted from having to listen to the cats loud protest all the way from home to the clinic! Many other cats turned up in cartons tied shut.  There was even a small boy with a cardboard box of kittens that had cello taped the carton shut but had carefully put air holes in the box with a pencil,  he even carried the roll of tape to retape it after the vaccinations were complete!

On the whole nearly all the dogs and cats were in very good condition, it came as a surprise to me. I have had the idea that the attitude towards companion animals is starting to change quite a bit in the last few years as I see more people attempting to keep animals as pets. In the last 8 years I think that the living conditions for people of low income would be harsher due to inflation, rising costs of housing, electricity and soaring basic food prices, but in fact, the dogs living alongside the villages seem to have improved. I drive along Dagoretti and Bananna  several times a week and  and the dogs visibly seem to be in better condition than a few years back.  Many people told me that they feed meat to their dogs, one little boy was complimented on his fat, shiny dogs. He proudly told me his family were butchers and they gave their dogs meat!

One man inquired if we could neuter his male dog. That was interesting for me as spaying and neutering are not so common in the villages as it’s costly and generally most men are against neutering male animals until they have been educated on the benefits. I asked him why he wanted it done. His reply was that he lived near a busy road and he knew as his dog matured he would start to roam to look for lady friends. He didn’t want to find his dog dead on the road some day. The ANAW folks took his phone number and will make an appointment to get his dog neutered through the district vet or their own vet as they have a few follow up cases to treat animals that needed more than they could do at the rabies clinic. They dispensed doses of wormer to puppies and the few thinnish dogs we saw. Some antibiotic was applied topically or given orally or even injected in a few cases where animals had wounds, or skin infections. We did a quick estimate as we packed up to leave, and it appeared there were about 250 plus dogs and cats vaccinated between 10-4 that day. As we were leaving we took a dose of vaccine back to the woman that kindly let us park in her yard, she had a pregnant cat and she wanted the vets to see if it could have the vaccination since she didn’t know when the kittens were due….when we returned, there had been 4 kittens born. So, Mama Cat and kittens will get their doses during the follow up visit.